Today I am liking.... Nicola Cornick 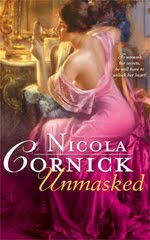 So why Nicola Cornick? It isn't just that her books are well written. It is her whole approach to writing regency romances that I admire. I like that her writing is fuelled by a passion for history, framed in a lifestyle and set of interests which provide endless inspiration. And I like that she tells her readers enough about herself that we know how her writing is fuelled!

I like that at the heart of each of her novels, lies a kernel of historical interest, ranging from the emergence of the cult of celebrity in Lord of Scandal, to the enforcement of random medieval laws as in the Brides of Fortune Series (I have yet to read them all, but I will). By aligning historical points such as these with strong characters and pacey storylines, Nicola's readers become immersed in the society of the era she is exploring without even noticing.

I like that Nicola's books are well written with realistic, likeable and delightfully imperfect characters. Her linked series don't have that irritatingly cosy clique-mentality which can sometimes be found in books which draw repeatedly on the same set of characters. The happily married couples don't stay frozen in amber in subsequent novels, stiff rumped people don't stay appallingly prudish and staid, unhappy people learn to be happy. The characters learn from their mistakes and are shaped by the events of the books. There is character development, there is motion, and it enables to the reader to feel involved with the progress of their lives.

Today I finished Unmasked, which is the prequel to the Brides of Fortune series. I always enjoy novels where the heroine has A Past - and preferably where the other characters have A Past too! I enjoyed the way that Unmasked touches upon the international scene and explores the human aspect of serfdom whilst still telling a fast paced, emotionally charged story. The novel subtlely explores the role of women in the regency, the choices they might have to make and the shades of grey in the freedoms permitted them. All the female characters in Unmasked are outside of regency convention as we understand it, and the novel is richer and more complex for that. Without verging into chick lit territory, Nicola's story-telling and characterisation is contemporary and immediate and brings alive the regency era for her readers, drawing strong parallels between the early 19th century and our own society.

I can't wait to read more!
Posted by Meg McNulty